Why I hated resistance bands and what changed my mind 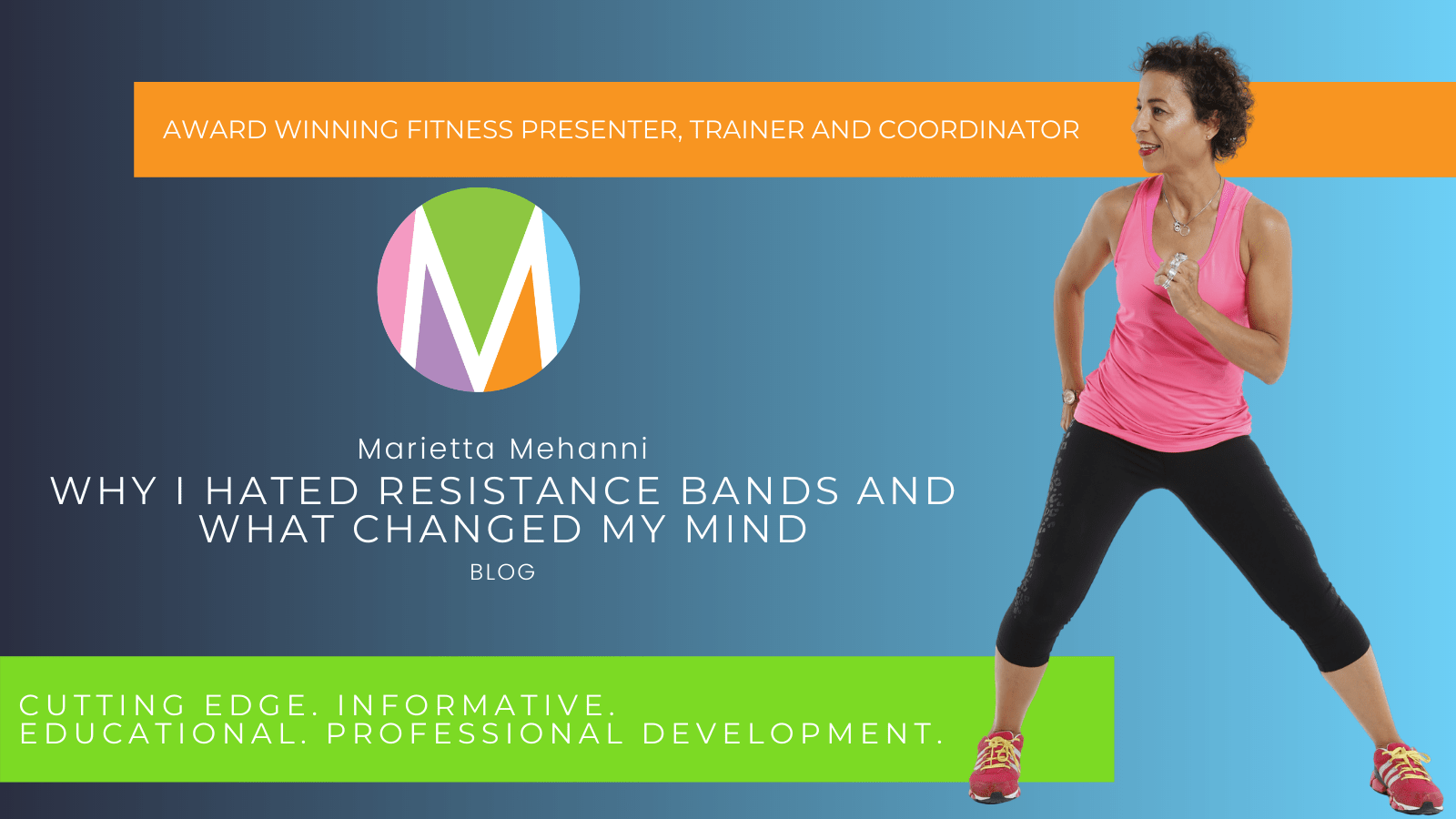 I was first introduced to resistance bands early in my teaching career in the 1990’s. This long piece of elastic was recommended as a portable and effective form of resistance training. Having only used weights for resistance training, this concept intriged me, only to be quickly disappointed.

Although the workshop presenter was very engaging and informative, I was frustrated as to how to anchor the bands and then perform the exercise. In addition to this, to add resistance, I had to either wrap the elastic band around my hand (thus reducing circulation to my fingers) or to grab and hold it firmly further down the band. This process was annoyingly repeated every time I performed an exercise – anchor, perhaps try another anchor, set up exercise, maybe anchor again, add resistance, lose circluation and then move…

Often the positions were complicated and awkward and left me annoyed, fustrated and losing interest fast.

When tubing with handles came onto the market, I discovered the new version that was even worse than the original!

In my opinion, the handles reduced the exercise options even further. I avoided anything to do with resistance bands after that. I chose to stick with what worked really well for me which was weights and body weight training, and subsequently my clients.

Some time later, a flyer came across my desk (when I was group fitness coordinator) advertising tubing attached to a stick! I thought ‘Oh my God! Just when I believed it couldn’t get any worse… it has morphed even further and turned into a comedy! What a ridiculously ineffective tool. NO THANK YOU’

The flyer went straight into the bin.

Later that year at a National Fitness Conference, I saw a demonstration using the tool from that flyer, on the main stage at the expo. The instructors were sweating and appeared to be working hard. I thought someone must have sprayed them with water to make the workout appear intense, and this thought was reaffirmed when the distributor offered me one of these sticks to join in. It weighed nothing and this was going to give me a workout?? What a joke!

So I walked away with my pride intact and head held high, not having been suckered into an absurd exercise fad purchase. No way was I being fooled!

In 2006 the YMCA had a conference that included education for group fitness instructors. I was invited to work on an expo stand for a music company. Whenever the education sessions were in progress, I would walk around and check out the other stands and lo and behold, there was that stick with the two rubber bands. I tried to avoid eye contact and quickly scurry away, but the woman who was working at the stand knew me and called me over. Trying to avoid appearing impolite, I walked over (mentally working out how I could get away). She asked me if I had used one of these tools before and I ungraciously said no. I knew what was coming next… “Why don’t you try it out?” My strategy was simple, get this over with and then be done with it!

She placed the stick in my hands and asked me to put the tubing loops around my feet. Having done so, I stood up and waited recluntantly for further instruction. Now I was to step forward into a split stance and perform a split squat, whilst holding the stick on my shoulders.

As I stepped forward something unexpected happened.

I felt my body respond to the bands pulling in different directions. I felt my abdominals respond in a way I had never felt with this exercise before. My body wanted to stay upright and my mind immediately thought of how this would be a corrective teaching tool. As I performed several repetitions, I realised that there were more muscles being used than I had experienced before with weights for this particular exercise.

As I stepped out of the exercise and removed the stick off my shoulders, I asked how I could change the resistance – ‘Oh by simply turning the stick so that the bands could wrap around the end of the stick’. It was the best OMG moment! So I didn’t have to lose circulation in my hands! I could tighten it a little or a lot. And it was so simple. I didn’t have to worry about anchoring the bands as they were looped around my feet.

‘What else can I do with this thing’? I asked excitedly, in spite of my initial reservations and the instructor proceeded to demonstrate a range of standing, kneeling and abdominal exercises.

This was so versatile and the options appeared endless. I could do all the traditional weighted exercises and then add resistance to other exercises, that were often difficult to intensify in a group exercise class.

I was blown away – firstly by the versatility and effectiveness of the tool and secondly, how the resistance bands could actually provide a challenging workout. I realised how silly I had been to jump to conclusions about this tool from my limited experience with resistance bands. I had always thought that weights were the answer for muscle overload and was now experiencing an epiphany as to how resistance tubing could be effective, especially when attached to a stick.

I walked away from that YMCA convention with an order for 20 Gymsticks and introduced it to my instructor team. That was 11 years ago and it is still my favourite class format and go-to workout when I am exercising on my own. I have a very low boredome tollerance and the Gymstick provides an endless number of exercises, which challenge my full body strength, endurance as well as balance and coordination. I am able to add or reduce resistance to suit my needs and now teaching five regular classes per week. I love the constant surprised look that people have when they use the Gymstick for the first time. Many participants have bought their own Gymstick for exercising at home or to take on holiday. Knowing that they are continuing with exercise outside of the gym, makes me feel fufilled as an instructor.

I am so glad that I was trapped into a situation where I had to use the Gymstick. I am mindful of my arrogance around what I think I know and now give new things a go before forming an opinion. I love the Gymstick and I hope you will check it out for yourself.

You can join me LIVE on Zoom for Gymstick classes, check out the timetable below

← Prev: Self Care Next: The social media rabbit hole →

It must be one of the most talked about topics,...

END_OF_DOCUMENT_TOKEN_TO_BE_REPLACED

Take care of yourself - no one else will do a...

END_OF_DOCUMENT_TOKEN_TO_BE_REPLACED

The elephant in the room

Let’s talk about an elephant in the room. The...