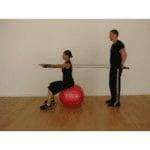 The Swiss Ball has been a tool synonymous with balance, stability and strength training for the past 12 years in the Australian fitness industry. An extensive background in rehabilitation especially within physiotherapy circles, the Swiss Ball has gain respect and value as a tool that no fitness trainer should be without.

So popular, the Swiss Ball is now found in offices, homes and every fitness club in the country. With it’s popularity, the diversity of exercises and uses on the ball has been truly remarkable. Who would have ever thought what could be achieved with a latex ball of air!!

Now with the use of weights, the ball is used as an effective tool for sports conditioning and heighten proprioception training. One of the challenges of using barbells and dumbbells on the ball is the is an increase risk of injury. There have been several cases of weights being dropped and balls bursting that have brought attention to hazardous potential of using weights on the ball.

Gymstick was invented in Finland by a team of fitness and health professionals from the Finnish Institute of Sport with the aim of providing a comprehensive strength and conditioning tool for the whole body. Its versatility, effectiveness and ability to meet the exercise needs of everybody has seen it grow to now being used in over 30 countries around the world.

Gymstick is used around the world by:

Gymstick’s key function is for total body resistance training with hundds of movements replicating free weight exercises. However unlike free weights that provide force in a downward direction along the line of gravity, Gymstick provides resistance in virtually any desired direction, in any body position. This enables you to, for example, recreate natural sports specific movements.

Gymstick also has attachment points to either side of the body’s centre of gravity which means the more the bands are stretched, the greater the challenge on the body musculature to maintain a stable trunk position. This ensures the body’s core is effectively ‘switched on’ during even the most basic exercises. The instability created by this lever arch also forces a greater improvement in joint strength and stability over free weights.

To complete a movement effectively with the Gymstick it forces you to maintain more eccentric control, which acts to increase pre loading for a more effective concentric muscle action and assists in maintaining tendon integrity, and a reduced risk of injury.

Gymstick can be used individually, in pairs or combined with other equipment such as a swiss ball or foam rollers. It can used in low level applications such as rehabilitation & proprioception, mid level resistance training and high level applications such as power, overloading and plyometric exercises. The number and type of exercises that you can be perform with a Gymstick is only limited to your imagination.

A free workout DVD and poster is included with every Gymstick along with free online training.

Training is available in:

Note: The added the dimension of the resistance of the bands changes the dynamics of the muscles used to stabilise the body e.g. increasing resistance will diminish the use of the hamstrings (and increase the requirement on gluteus maximus to compensate) and introduce a contraction in the vastus group in order to stop you rolling forwards

Why I hated resistance bands and what changed my mind

I was first introduced to resistance bands early...